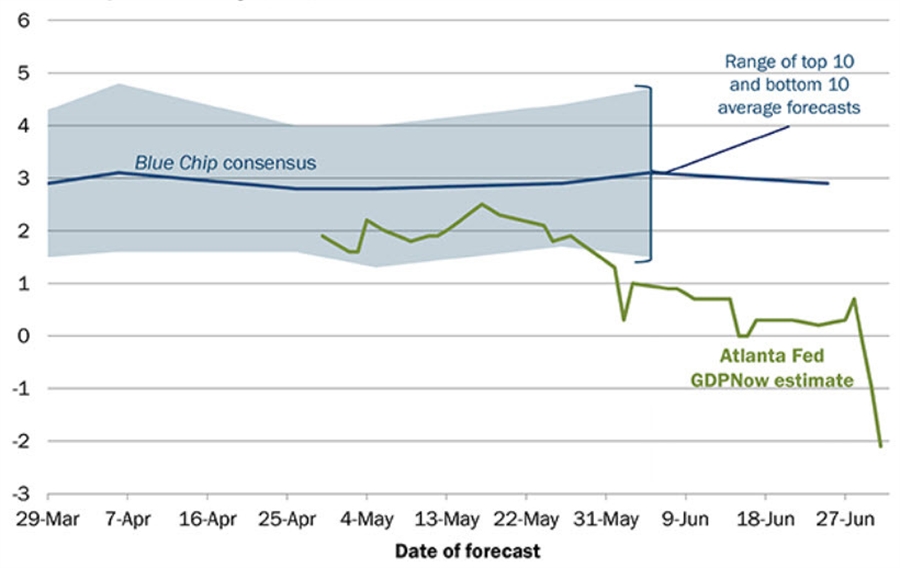 We started the week at +0.2% in the Atlanta Fed’s GDP tracker. After a series of economic data point disappointments, it’s now at -2.1%. That’s down from yesterday’s reading of -1.0% and comes after today’s data on manufacturing and construction spending.

The GDPNow model estimate for real GDP growth (seasonally adjusted annual rate) in the second quarter of 2022 is -2.1 percent
on July 1, down from -1.0 percent on June 30. After this morning’s
Manufacturing ISM Report On Business from the Institute for Supply
Management and the construction report from the US Census Bureau, the
nowcasts of second-quarter real personal consumption expenditures growth
and real gross private domestic investment growth decreased from 1.7
percent and -13.2 percent, respectively, to 0.8 percent and -15.2
percent, respectively.

I maintain that a recession isn’t going to be that bad of a thing for jobs and the real economy; it will mostly be due to pandemic skews but right now there’s no fighting the negative sentiment.