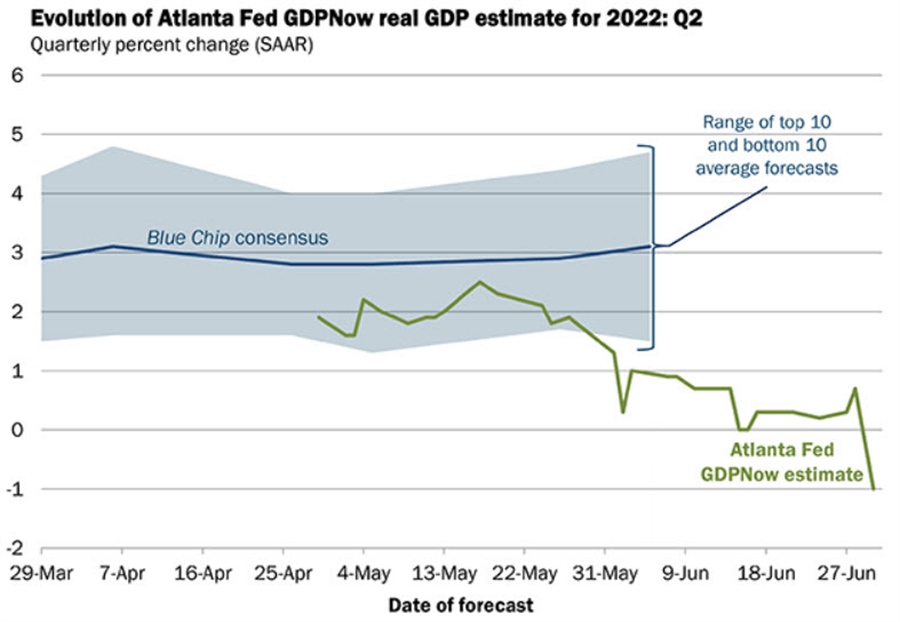 This is the first dip into negative territory and it’s a big dip. You could see this coming after yesterday’s Q1 GDP revisions. The consumption numbers in today’s PCE report were also poor.

The GDPNow model estimate for real GDP growth (seasonally adjusted annual rate) in the second quarter of 2022 is -1.0 percent on June 30, down from 0.3 percent on June 27. After recent releases from the US Bureau of Economic Analysis and the US Census Bureau, the nowcasts of second-quarter real personal consumption expenditures growth and real gross private domestic investment growth decreased from 2.7 percent and -8.1 percent, respectively, to 1.7 percent and -13.2 percent, respectively, while the nowcast of the contribution of the change in real net exports to second-quarter GDP growth increased from -0.11 percentage points to 0.35 percentage points.

This report normally isn’t a market mover but with all eyes on growth suddenly, it could be. A negative reading in Q2 GDP would be a technical recession after -1.5% in Q1.

We’ll get another update on this tracker tomorrow after construction spending and the ISM manufacturing report.

The Most Profitable PRICE ACTION- 100% Successful STRATEGY || Price Action | Forex | Crypto Us Stock
Deliveroo first-half losses widen as food delivery firm plans exit from the Netherlands
The price of a pint is going through the roof. Here’s why UK beer costs are far outpacing inflation
USDCAD making a break for it
Huawei’s second quarter revenue rises slightly from a year ago