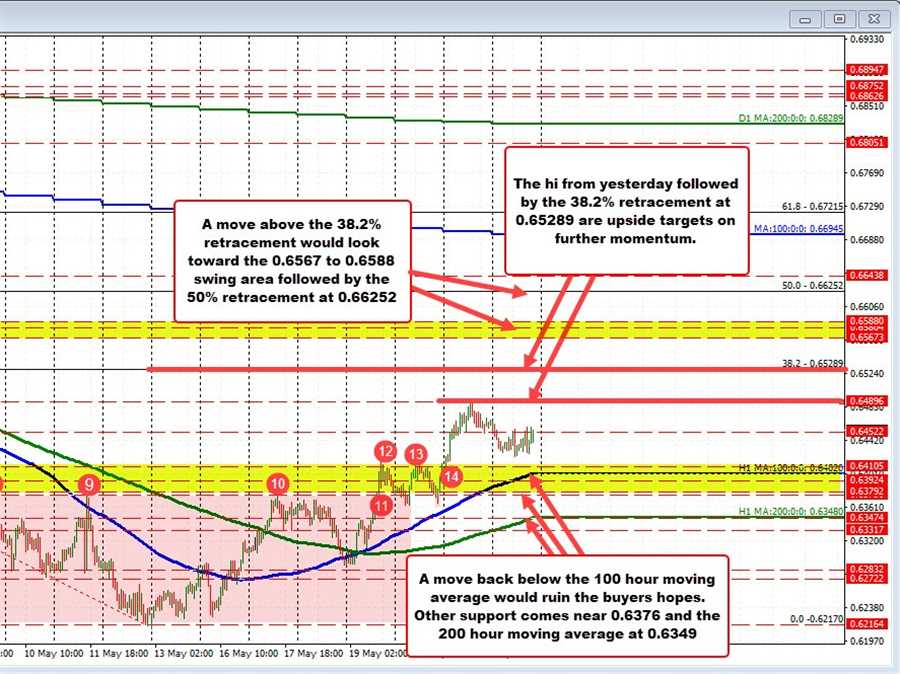 The  NZDUSD  is trading marginally lower ahead of the RBNZ decision that will be announced at 10 PM ET. The expectations are for a 50 basis point hike to 2.00%.

What are others saying?

The consensus for a 50 basis point hike is baked in the cake, but the devil will be in the details for the future expectations.

Looking at the hourly chart above, the NZDUSD pair moved to the lowest level since June 2020 on May 12 when the price bottomed at 0.62170. Since then, the price has been up 6 the last 7 trading days. Today is so far a modest down day, with up and down price action.

The subsequent move higher on Thursday took the price above a swing area between 0.6376 and 0.64105 during yesterday’s trade on its way to the recent corrective high of 0.64896.

The fall from the high saw the price low today has reach 0.64225. That level remains fairly comfortably above the high of that swing area (by about 12 pips) and the low of that swing area (at 0.6376). The rising 100 hour moving average at 0.6403 is also in-play on further selling.

It would now take a move below that area to give the sellers more confidence and control, with the 100 hour moving average a key barometer to get to and through (and stay below). If the 100 hour MA is broken, traders will look for it to switch from a support target to a resistance target.

Another key downside target would be the rising 200 hour moving average at 0.63491

On the topside, the somewhat random high price from yesterday at 0.64896 would be the 1st target to get to and through, followed by the 38.2% retracement of the move down from the April 5 high which cuts across at 0.65289.

Ultimately if the buyers are to take more control in the NZDUSD, getting above the 38.2% retracement of the trend move down from the April high is a requirement. Absent that, and the buyers are simply not winning. The sellers remain more in control.

Once again much will depend on the expectations for future policy moves vs. the 50 basis point hike that is largely expected. Watch the technical levels for clues. Ultimately the price action will tell the story, and influence the headlines for the post rate hike commentary.

A day after Powell’s assurances about the economy, markets are worried that ‘the Fed breaks something’
Gores Guggenheim Stock News and Forecast: GGPI shares dropping Thursday despite Polestar merger completion
USDCAD dips back below the 100 hour MA after CPI but rebounds
Vroom Stock Forecast: VRM continues advance on Friday
Gold prices flat as rise in U.S. bond yields weighs