The US CPI data came out for the month of September and continued to show increased inflation pressures. The headline number came in touch stronger than expected 5.4%. The core measure came in as expected 4.0%. Both are well above the 2% target in addition the wage component showed a higher-than-expected 0.8% increase the versus 0.3% last month.

The initial shock sent US yields higher, and the greenback higher as well. Spot gold which was up around $17 at the start of the US session, moved down toward unchanged levels. US stocks gave up some early premarket gains. However, the moves started to reverse course.

In the US stock market the major indices fluctuated up and down with the NASDAQ index outperforming relatively on the back of the lower interest rates.

In contrast, the Dow industrial average moved down -0.77% at it’s lows. The NASDAQ index stayed positive even at it’s lows (at 0.04%). The S&P was in between those two indices with lowest level bottoming near -0.5% and the highest level peaking near +0.5%.

The final numbers in the US stock market had the NASDAQ and the S&P snapping their three-day losing streak. The Dow industrial average closed fractionally lower by -0.53 point. That still was good for the fourth consecutive decline.

In the forex market today, the CHF is ending the day is the strongest of the majors, while the USD is the weakest. 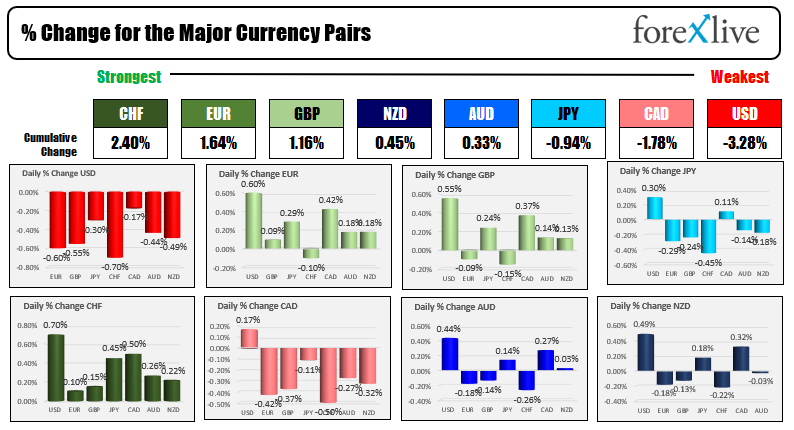 What can we look forward to technically going into the new day?

In Australia, the employment report will be released. The consensus is for 137.5K jobs lost and unemployment ticking up to 4.8% from 4.5%. However, with hopes for the shoe drop to potential be the last, traders will be paying attention to the price action on the release.

Looking at the hourly chart, the pair is trading near the highest level since September 10. The price is trading at 0.7381. That is just short of the high from yesterday’s trade at 0.7384.  The low price today was able to dip below its 100 hour moving average (currently at 0.7336 and moving higher, but found support against the 50% midpoint of the range since September 3 at 0.73229. Ahead of those levels is the 61.8% retracement of the same range at 0.73594.

Should the price decline on a weak-ish number, traders will be eyeing those levels for clues. If the price can find support near the 61.8% retracement at 0.7359, that would be good news for a snapback rally and run higher.  Even if the price were to decline to the 100 hour moving average and hold support, the buyers could be waiting there to stall the fall and race higher.

Where things would get more dicey if the 50% midpoint were broken. Traders would not like that storyline from a technical perspective.

The break higher above the moving average today, followed by the move above the recent swing highs at 1.1586, gives the pair a little bit more of a bullish bias for the first time in a long while.

At least traders now that as long as the price stays above the 200 hour moving average, the longs still have a shot for further upside probing.

Ultimately if the buyers are to take more control getting above the 38.2% retracement of the trend move lower is the minimum retracement level needed to show some strength