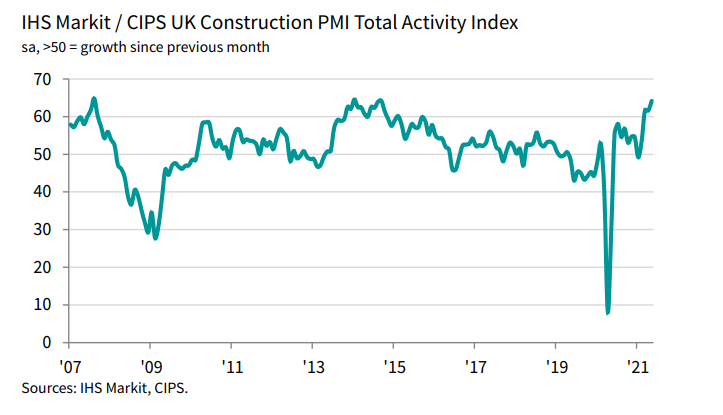 There are plenty of positives in this report, with new orders increasing at its quickest pace on record while output growth accelerates to its strongest since September 2014.

New business volumes also surged and employment conditions have improved markedly, bolstered by a surge in optimism with regards to business sentiment.

That said, higher cost inflation is still a problem as it climbs to a record high and will be a persistent issue that will keep coming up in the months ahead. Markit notes that:

“UK construction companies reported another month of
rapid output growth amid a surge in residential work and
the fastest rise in commercial building since August 2007.
Total new orders increased at the strongest rate since the
survey began more than two decades ago, but supply
chains once again struggled to keep pace with the rebound
in demand.

“There were widespread reports citing shortages of
construction materials and wait times from suppliers
lengthened considerably in comparison to those seen
during April. Imbalanced supply and demand led to surveyrecord increases in both purchasing prices and rates
charged by sub-contractors.

“Despite severe challenges with materials availability,
construction firms remain highly upbeat about their nearterm growth prospects. Nearly two-thirds of the survey
panel forecast an increase in output during the year ahead,
while only one-in-thirteen forecast a decline.”