The US employment report showed a gain of 559K (with revisions of +27K) but that was not enough to satisfy those looking for tapering sooner rather than later. The expectations was for 675K (with the whisper levels likely higher than that given the tepid 266K – revised to 278K – last month).  The unemployment rate did dipped to 5.8% from 6.1% as labor force participation rate fell to 61.6%. The shortfall from pre-pandemic levels is still 7.6 million, which is likely to keep the Fed tapering on hold, although they are still likely to start thinking about the tapering process when they meet on June 15 and 16th.

The gains today pushed the S&P and NASDAQ index into positive territory for the week. The NASDAQ gained 0.57% and the S&P rose 0.69%.  Looking at the global indices, Spain’s Ibex, Japan’s Nikkei, and the Shanghai composite index were the only major indices down for the week. Australia’s ASX 2000 and Italy’s FTSE MIB, were the biggest gainers (+1.61% and +1.59% respectively).  The German DAX closed at a record level after reaching an all-time high price today at 15705.89.

Also help today were US treasuries. They rose and price/fell in yields, with the 10 year US yield leading the way with a -7 basis point decline. The US 30 year yield fell -6.6 basis point.

Looking at the changes for the week, the global yields are mostly lower with the exception of Japan’s 10 year which rose 0.4 basis points. Italy’s 10 year fell -4 basis points on the week. The US 10 year – thanks to today’s decline – fell by -3.75 basis points.

With yields falling and stocks rising, the US dollar moved to the downside and was the weakest of the major currencies. The risk on flows sent the AUD and NZD. They were the strongest of the majors today. 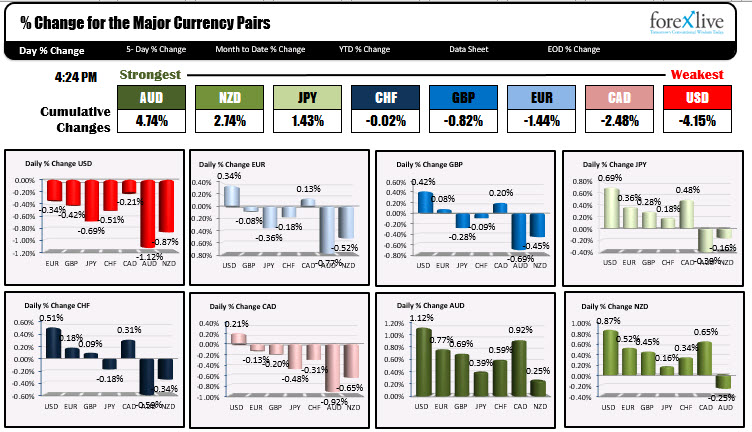 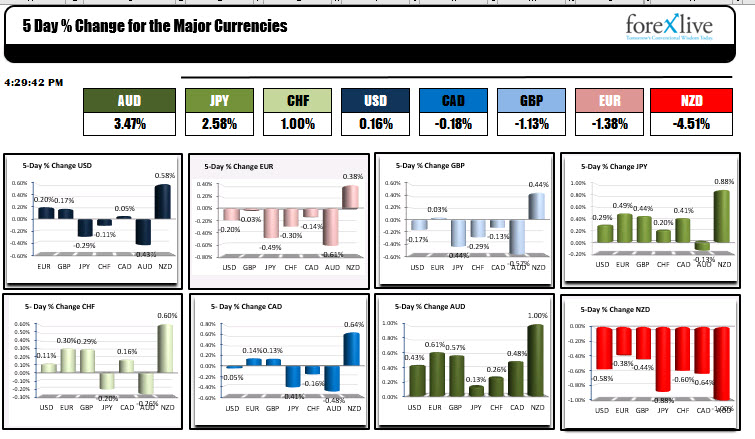 In other markets today: