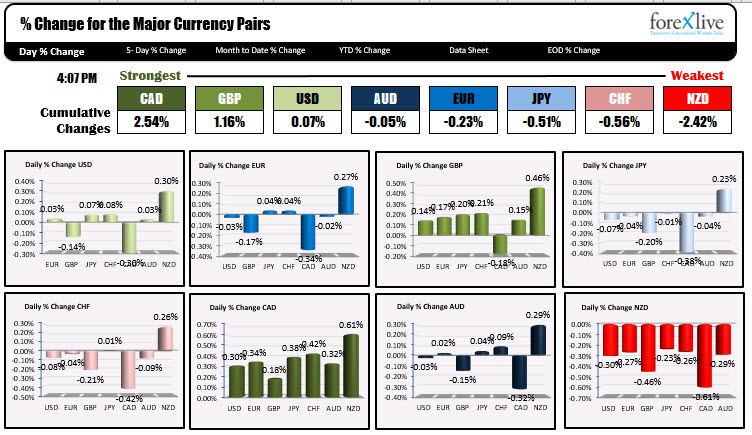 A rollercoaster day in the forex and stock markets today. The only data came out of Canada  with building permits which showed a decline of -0.5% but that was much better than expectations.

The Feds Beige book was released later in the day, and showed that the economy expanded at a somewhat faster rate. Most important was the comments on inflation.

They added, “Strengthening demand, however, allowed some businesses, particularly manufacturers, builders, and transportation companies, to pass through much of the cost increases to their customers. Looking forward, contacts anticipate facing cost increases and charging higher prices in coming months”.

Inflation is on the rise.   The Federal Reserve will meet on June 15 and 16 with the expectations that they will look to signal that they are thinking about tapering the QE purchases in what is step one of the unwind.

As far as the price action, the North American session started with the USD on the rise. But as soon as the traders hit their seats in NY, the green back started to take back some/all of the earlier declines.   Overall, the although the summation of the changes for the USD near the close show little in the way of change, the dollar was indeed higher and lost a lot of its mojo through the session.

For the day, the CAD was the strongest of the majors helped by rising oil prices and the housing data (much better than expectations).  The NZD was the weakest at the start, and remained in that spot at the end of the day.

Much in way the forex market fluctuated, so too did the US stock market today. Earlier the indices moved higher, but the market saw the gains all erased and the price go into the red in the early NY afternoon. However, at the final bell, some late day buying pushed the shares higher with each of the major indices closing higher on the day. Both the NASDAQ and the S&P rose by modest 0.14% gains. The Dow, which close higher for the fifth consecutive day, increased by 0.07%. The S&P is less than 1% from its all-time high. The Dow is about 2% from its high.  The Nasdaq index is wandering higher but has alternated moving up one day and down the next for 10 consecutive days now.  I guess tomorrow will be a down day.

In the US debt market, the 10 year yield opened negative by -0.7 basis points, and is ending with day with the decline of -1.9 basis points. The decline in yields helped to lead the USD lower include today.

In other markets near the close:

For a technical review of the major currencies vs the USD going into the new trading day, CLICK HERE.  Most of the pairs are still trading in an up and down price range and near key barometers for both the bulls and the bears.
This article was originally published by Forexlive.com. Read the original article here.