The price of gold is back to flat on the day in what has been a correction of this week’s rally into daily resistance near $1,730. The price fell from a high of $1,725.60 to a low of $1,706.95 but held above the prior day’s lows despite firmer US yields and a stronger US dollar.

Overall, the yellow metal has been more robust of late, making its way back into the $1,700’s this week, recovering from last month’s lows that were made as US bond yields surged to multi-year highs. The sentiment surrounding the Federal Reserve has been the driver, as fickle as it is. However, with data ebbing and flowing in and out of the inflationary territory, the yellow metal has been able to benefit at times of less hawkish speculation surrounding the Fed’s next moves with participants betting on a pivot at the start of the week. 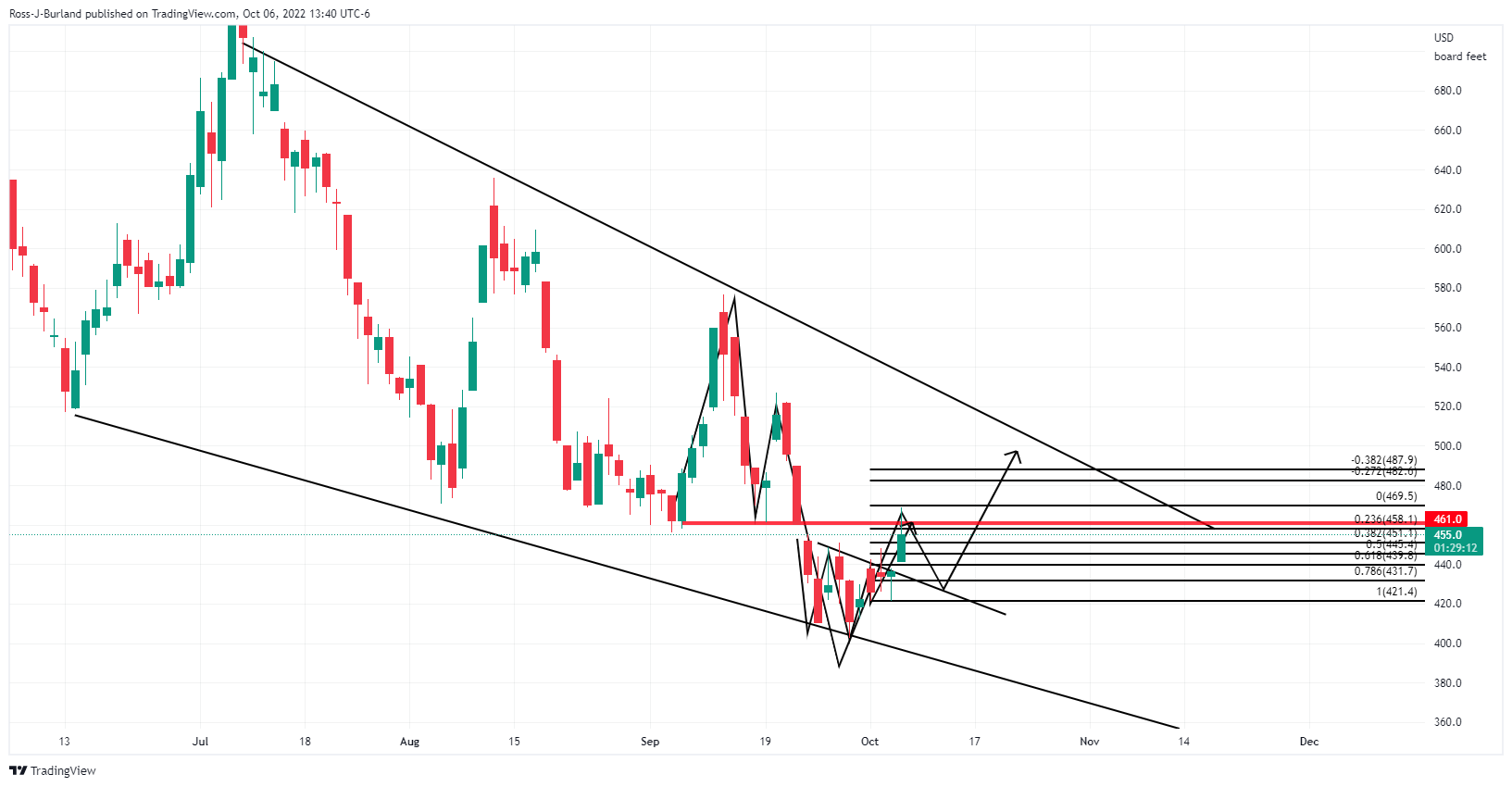 The classic falling wedge and M-formation is bullish for the outlook in lumber. From sawmills to store shelves, lumber can tell the markets a lot about what’s going on in the US economy and with prospects of higher prices in oil and lumber, inflation would be expected to stay elevated. This in turn coincides with a chorus of Fed’s hawkish speakers this week.

Charles L. Evan who is the chief executive officer of the Federal Reserve Bank of Chicago has said in recent trade that inflation is very high right now and that’s the issue that’s top of mind for the Fed. ”At Fed’s next meeting will discuss whether 50 bps or 75 bps,” he said, adding, ”policymakers are looking for 125 bps of rate hikes over next two meetings.”

”In the meantime, however, the margin of safety against a change in trend signals has eroded, which places a low bar for additional buying activity from CTAs. While the cohort has continued to add to their silver length in recent sessions, gold prices need only rise north of $1755/oz to catalyze a trend following buying program.”

As for price action on the day, so far, the US dollar,  despite downbeat Initial Jobless Claims, rose and extended its gains from the previous day. On Thursday, the greenback is back above 112.00, recovering from when it was initially falling against most majors at the start of the week before regaining ground: 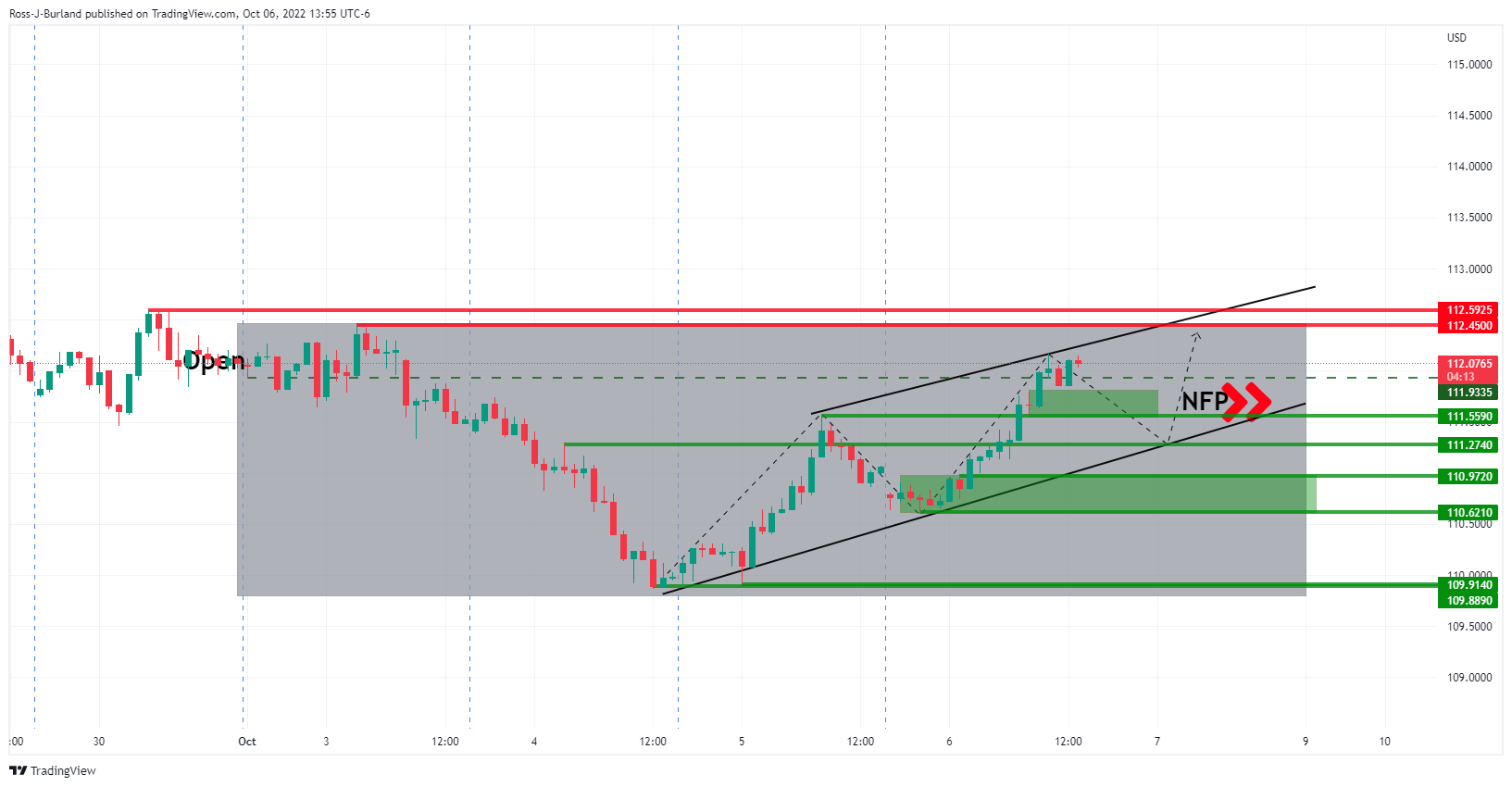 As for the 10-year yield, this too headed higher and there could be more to come before the week is out:

US benchmark Treasury yields whose recent gains have helped to drive the greenback higher, were up to test the prior resistance at 3.841%. The yield was piercing those highs on Thursday and printing 3.844% as Wall Street cash markets fell in the open.

The focus will be on the Nonfarm Payrolls to close out the week. ”Employment likely continued to advance strongly in September but at a less robust pace compared to recent months,” analysts at TD Securities explained.

”We also look for wage growth to moderate to 0.3% m/m. Separately, regional surveys continue to point to the loss of momentum in mfg activity. While we look for a decline in the ISM index, we note that it has failed to match prior weakness suggested by other indicators.” 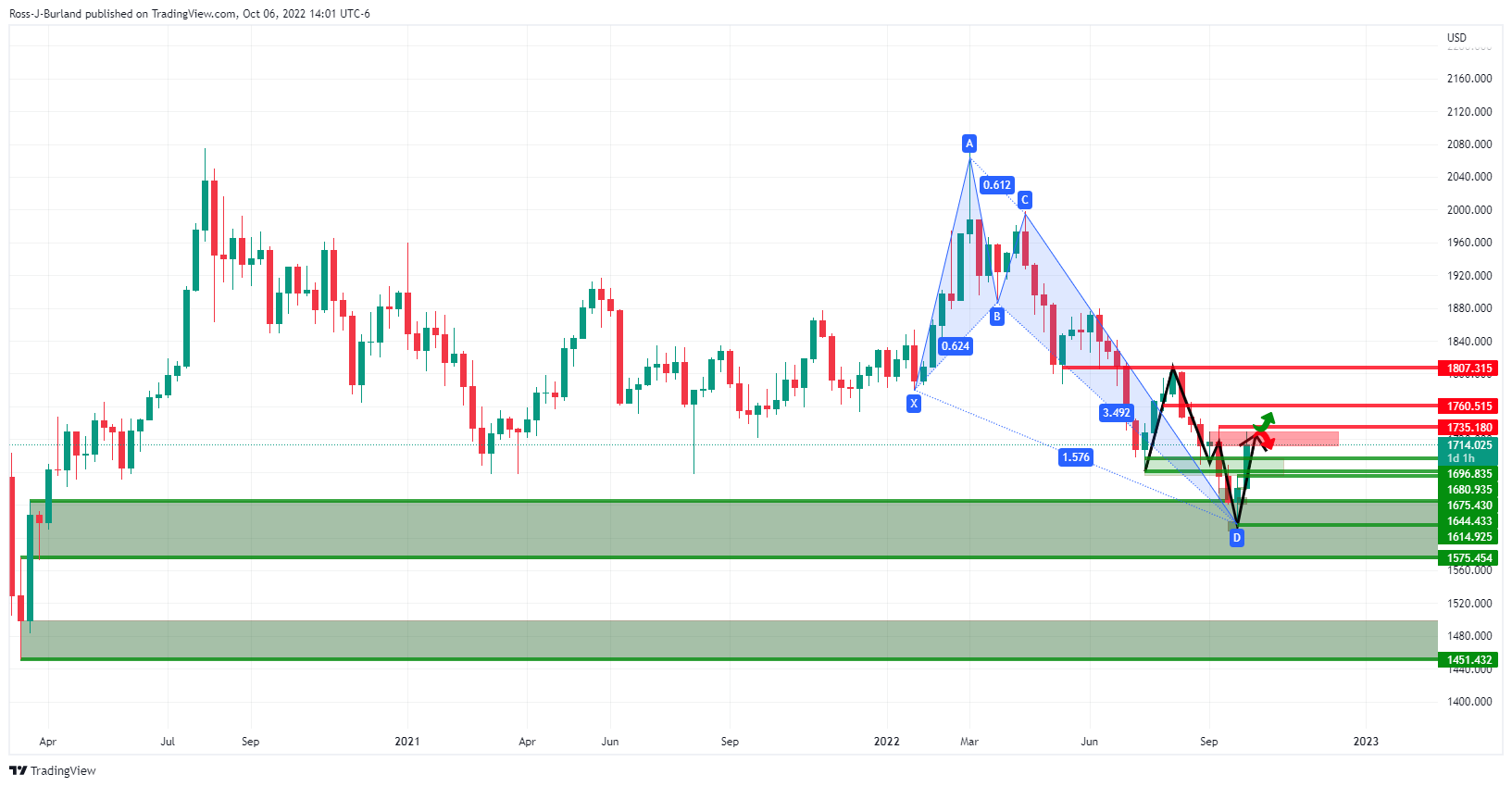 A break of the recent $1,735 highs opens the risk of a significant bullish extension. However, it is make-or-break time and the price could easily retreat, depending on Friday’s NFP and next week’s inflation data.

Backtrader Live Forex Trading with Interactive Brokers (Part 1)
Major European indices in the day with modest gains
US stocks head into the last half-hour of trading for the week
Taking down crypto influencers is one step that would help to heal the market
EUR/USD: Rebound may have already peaked just shy of 1.05 – Crédit Agricole