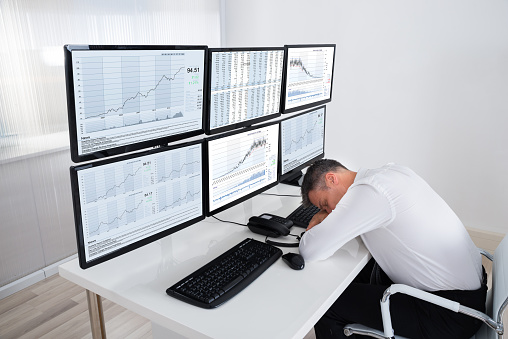 The forex markets are very quiet today, with major pairs and crosses stuck inside yesterday’s range so far. Dollar is trying to recover but lacks sustained buying. Traders are clearly holding the bets before tomorrow’s non-farm payroll report. As for the week, the greenback remains the worst performer, followed by Yen and Swiss Franc. Commodity currencies are the stronger ones, but they’re just in corrective recovery. Euro and Sterling are mixed.

Technically, if Dollar is going to resume it’s prior up trend, it will more likely breakout against commodity currencies first, with help from return of risk-off sentiment. Thus, some focuses will be on 0.6362 temporary low in AUD/USD and 1.3832 temporary top in USD/CAD. Break of these levels could be a prelude to more broad-based comeback of the greenback. 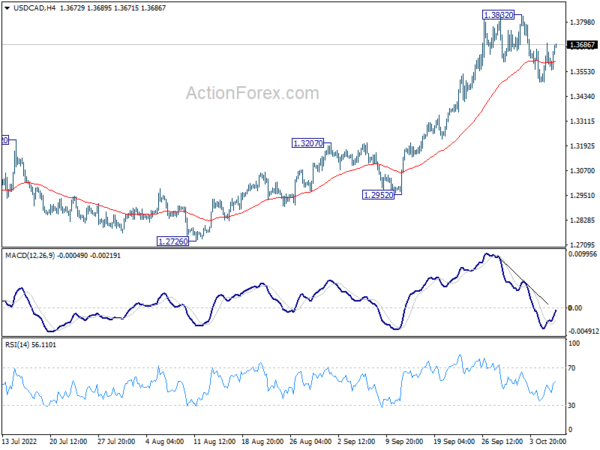 US initial jobless claims rose to 219k, above expectation

US initial jobless claims rose 29k to 219k in the week ending October 1, above expectation of 205k. Four-week moving average of initial claims rose 250 to 206.5k.

The accounts of ECB’s September 7-8 monetary policy meeting showed that a “very large number” of committee members expressed a preference for a 75bps hike, which was “a proportionate response” to upward revisions to inflation outlook and an important signal of the determination to bring inflation back to target in a “timely manner”.

But “some members” preferred a 50bps hike as that would be “large enough to signal determination in proceeding with the interest rate normalization”. With the “looming risk of a recession”, a 50bps hike as part of a “sustained path towards more neutral rate levels” might prove “sufficient” to return inflation to target. “What needed to be addressed was the risk of the sharp rise in inflation, exacerbated by the war, destabilizing inflation expectations,” the account noted.

But add the end, all members joined a consensus for the 75bps hike, while maintain that policy should “not follow a pre-set path”, and be set on a “meeting-by-meeting basis.

Eurozone retail sales volume dropped -0.3% mom in August, matched expectations. Retail trade volume decreased by -0.8% for food, drinks and tobacco, while it increased by 0.2% for non-food products and by 3.2% for automotive fuels.

UK PMI construction rose from 49.2 to 52.3 in September, above expectation of 48.1. S&P Global said total industry activity rose for the first time three months. Output growth was linked to work on delayed projects. Business optimism was the lowest since July 2020 as new orders stalled.

Tim Moore, Economics Director at S&P Global Market Intelligence, said: “Forward-looking survey indicators took another turn for the worse in September, with new business volumes stalling and output growth expectations for the year ahead now the lowest since July 2020. This reflected deepening concerns across the construction sector that rising interest rates, the energy crisis and UK recession risks are all set to dampen client demand in the coming months.”

New Zealand Deputy Prime Minister Grant Robertson said today that it’s going to be a “challenging year” with “global slowdown”. New Zealand would see “less demand and some slowdown”. But, “that doesn’t mean, to me, a recession. There is balance to struck here.”

“Monetary and fiscal policies need to be coordinated, to work together,” he said. “As interest rates rise they’ll restrict demand.” He also said that he’s “not concerned on the long-term outlook for the New Zealand dollar.”

USD/CHF is still extending the consolidation pattern form 0.9964 and intraday bias remains neutral. Outlook is unchanged that further rally is in favor as long as 0.9694 support holds. On the upside, above 0.9964 will resume the rally from 0.9369 to retest 1.0063 high. On the downside, however, break of 0.9694 support will extend the corrective pattern from 1.0063 with another falling leg, towards 0.9478 support first. 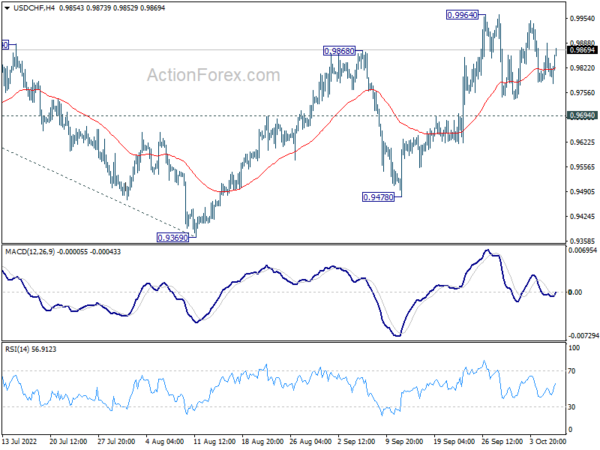 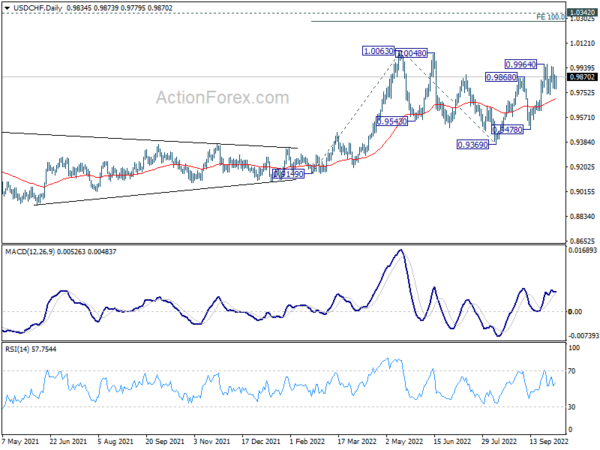 How I do my SIMPLE forex analysis everyday (FULL BREAKDOWN)
How to trade a Winning Trend Trading strategy step by step
Major European indices in the day with modest gains
I Am Finally REVEALING MY SECRET FOREX STRATEGY | Do This Now!
Crypto Twitter reacts to Binance CEO’s deleted tweet about Coinbase’s Bitcoin Holdings