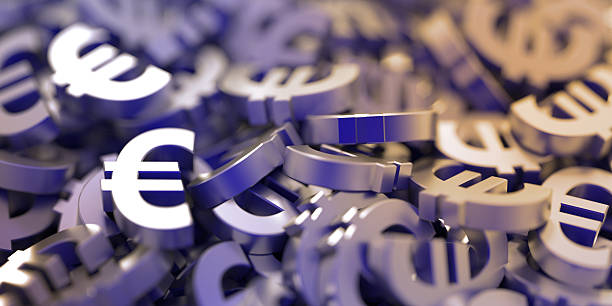 Euro falls broadly today after worse than expectation PMI data. Aussie and Loonie are also weak as commodity prices pull back. On the other hand, Yen and Swiss Franc are rebounding, following the rather deep pull back in US and European benchmark yields. Stock markets are mixed with European indexes trading in red, but US markets open slightly higher.

Technically, EUR/JPY’s break of 141.93 minor support suggest rejection by 144.23 resistance, and deeper retreat could be seen. Similarly, USD/JPY and GBP/JPY could also head lower for the near term,, if treasury yields extend pull back. But for now, there is no clear sign of trend reversal, and Yen crosses should resume rally sooner rather than later.

UK PMI composite unchanged at 53.1, troubling combination of recession and inflation into H2

Chris Williamson, Chief Business Economist at S&P Global Market Intelligence said: “The weakness of the broad flow of economic data so far in the second quarter points to a drop in GDP which the forward-looking PMI numbers suggest will gather momentum in the third quarter. While there are some signs that the inflation could soon peak, the survey data suggest the rate of inflation will meanwhile remain historically high for some time to come, indicating that the UK looks set for a troubling combination of recession and elevated inflation as we move into the second half of the year.”

Chris Williamson, Chief Business Economist at S&P Global Market Intelligence said: “Eurozone economic growth is showing signs of faltering … Excluding pandemic lockdown months, June’s slowdown was the most abrupt recorded by the survey since the height of the global financial crisis in November 2008…. The slowdown means the latest data signal a rate of GDP growth of just 0.2% at the end of the second quarter, down sharply from 0.6% at the end of the first quarter, with worse likely to come in the second half of the year.”

Japan PMI manufacturing dropped to 52.7, but services jumped to 54.2

Intraday bias in EUR/JPY is back on the downside with break of 141.93 minor support. Current fall is viewed as the third leg of the consolidation from 144.23. Deeper decline could be seen to 137.83 support. On the upside, decisive break of 144.23 will resume larger up trend. 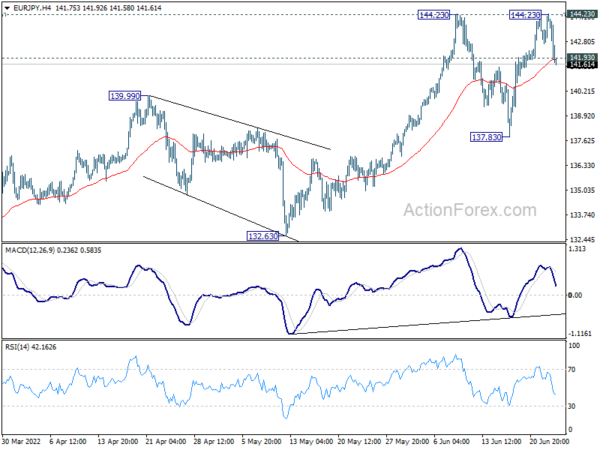 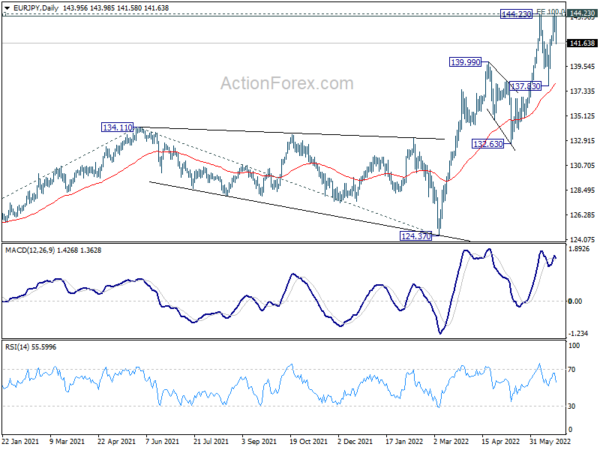 China PMIs: messages in the sub-indices signalling that full recovery will take some time
Gold jumps Rs 1,088 amid import duty hike
USDCAD dips back below the 100 hour MA after CPI but rebounds
PBOC’s Wang: China’s GDP expected to grow 4.7% this year, below 5.5% target
Gold declines Rs 176 amid weak global trends