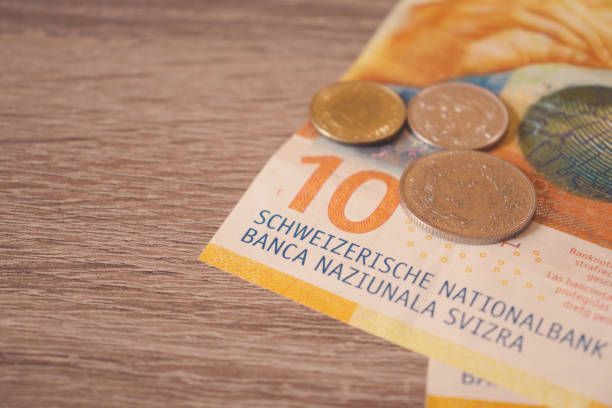 Swiss Franc is generally firm as weekend approaches. Even though there was no follow through buying in Euro after ECB overnight, the common currency is somewhat support mildly by the strength in the Franc. Meanwhile, Yen’s selloff faded quickly, together with the rebound attempt in treasury yields. Dollar, Canadian Dollar and New Zealand Dollar are the relatively weaker ones, together with Aussie.

Technically, Sterling could be a focus today with UK GDP data featured. GBP/USD’s rebound from yesterday’s low was rather impressive and focus is now slightly back on 1.4248 resistance. Sustained break there will confirm up trend resumption, following USD/CHF’s down trend resumption path. GBP/JPY also maintains most of yesterday’s gains and could be heading back towards 156.05 top.

BoC Deputy Governor Timothy Lane said in a speech that, “the bottom line is that the Canadian economy has been largely on track with our story.”Vaccinations are also rolling out “at, or faster than, the pace we assumed in April”. Other economies are also picking up “smartly as they have reopened”. The developments are “encouraging” and suggest that “we are on track for a strong consumer-led recovery as containment measures ease here in Canada.”

Some decisions on further adjustment on asset purchases could be made in July. Lane reiterated that “if the recovery evolves in line with or stronger than in our latest projection, then the economy won’t need as much QE stimulus over time”. BoC would have the “coming weeks” to assess the reopening in Canada, and there will be an updated outlook in July too.

BusinessNZ’s executive director for manufacturing Catherine Beard said: “Globally, manufacturing activity continues to expand at a robust pace, culminating in an 11-year high for May. However, this has led to upwards pressure on input prices across most countries, including New Zealand, given comments from respondents outlining increased costs of raw materials.”

UK GDP will be a major focus in European session while productions and trade balance will be featured. Later in the day, Canada will release capacity utilization. US will release U of Michigan consumer sentiment.

Intraday bias in USD/CHF stays mildly on the downside for the moment. Current decline from 0.9471 should target a test on 0.8756 low. On the upside, break of 0.9052 resistance is needed to indicate short term bottoming. Otherwise, outlook will stay bearish in case of recovery. 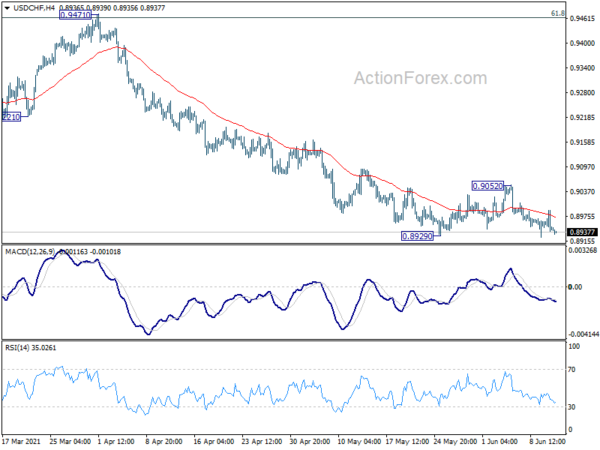 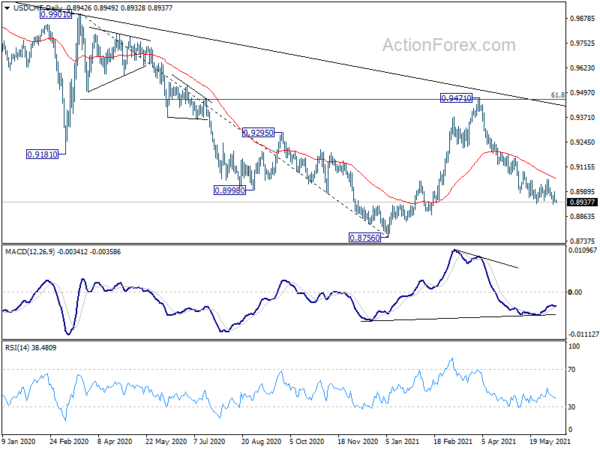