Silver attracted some dip-buying near the lower end of its weekly trading range, around the $27.45 region and refreshed daily tops during the early part of the European session.

The mentioned area marks an important confluence support comprising an ascending trend-line extending from YTD lows and 100-period SMA on the 4-hour chart. This should now act as a key pivotal point for short-term traders and help determine the next leg of a directional move for the XAG/USD.

The commodity, for now, seems to have stalled its retracement slide from one-week tops, around the $28.20-25 region touched in the previous session. That said, the lack of any follow-through buying warrants some caution before traders start positioning for any further appreciating move.

Meanwhile, technical indicators on hourly charts have started drifting into the negative territory, albeit maintained their bullish bias on the daily chart. This makes it prudent to wait for sustained weakness below the said confluence support in order to confirm a near-term bearish bias.

Some follow-through selling below the last week’s swing low, near the $27.20 area will reaffirm a breakdown and prompt aggressive technical selling. The XAG/USD might then turn vulnerable to break below the $27.00 mark and accelerate the slide to 200-period SMA, around the $26.75 region.

On the flip side, the $28.00 mark now seems to act as an immediate resistance ahead of the $28.20-25 supply zone. A convincing break through the mentioned hurdle should pave the way for a move beyond the $28.75 intermediate hurdle and allow bulls to aim back to reclaim the $29.00 round figure. 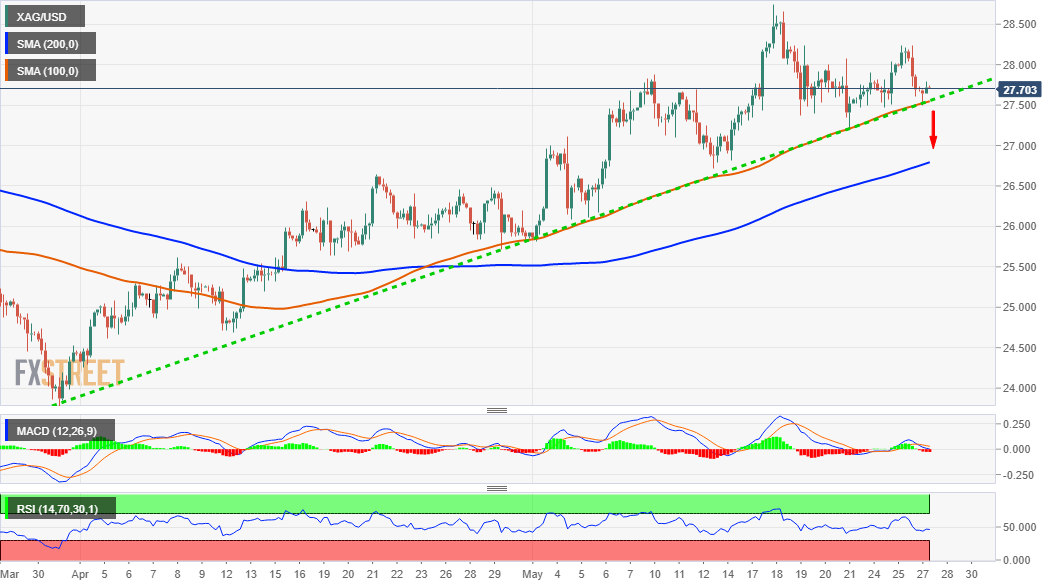