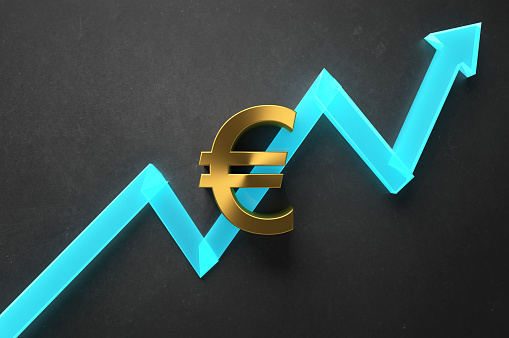 Euro surges broadly today, while German DAX and Stoxx 600 hit new record highs. Strong German business climate reading gave sentiments a strong lift. For now the common currency is only out-performed by New Zealand Dollar, and followed by Swiss Franc. On the other hand, positive market sentiment makes Yen the weakest one, followed by Dollar and then Sterling.

Technically, EUR/USD’s break of 1.2244 confirms resumption of rise from 1.1703 for 1.2348 high. EUR/JPY also breaks 133.42 resistance to resume medium term up trend. Now, one focus will be on EUR/CHF. Euro’s underlying strength would really be confirmed if 1.1026 resistance is taken out firmly to indicate completion of consolidation pattern from 1.1149. 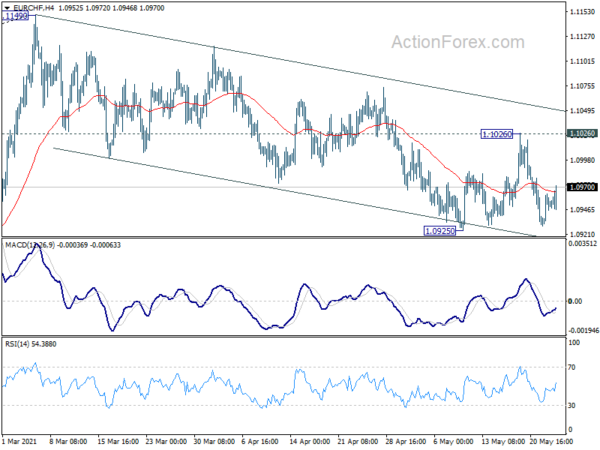 ECB Stournaras: Not the right to think about transition from PEPP to APP

ECB Governing Council member Yannis Stournaras said that “I cannot say we are out of the woods yet”, as “there has been an acceleration in vaccinations but there are still travel restrictions ”

Also, there is no reason to make any change to the PEPP purchases at the moment. It’s not the right time yet to shift from PEPP to APP purchases. He added, “of course, at some point in the future this will occur, there’s no doubt about that. We have to think about a smooth transition from PEPP to APP.”

He also talked down the threat of inflation and said, “as the economy gets out of the pandemic, supply-side bottlenecks make their appearance but this is expected to smooth out over time.”

Ifo said: “Companies were more satisfied with their current business situation. They are also more optimistic regarding the coming months. The German economy is picking up speed.”

All sectors were down on a year earlier. In particular, services dropped -13.9% yoy. Gross value of manufacturing was still down -1.2% yoy despite improvement in the second half. Information and communications was the only sector that saw noticeable growth of 0.7% yoy.

ABS said, “following strong exports in March 2021, metalliferous ores increased another 1 per cent in April 2021 to record a historic high of $16.5 billion, driving record high exports”. The increase in coal exports was driven by thermal coal, up $203 million, with an increase of $116 million to India. Australian coal exports to India have been steadily rising since mid-2020, following a substantial reduction in Chinese demand for Australian coal.

EUR/USD’s rise from 1.1703 resumes by breaking 1.2244 temporary top today. Intraday bias is back on the upside for retesting 1.2348 high. Firm break there will resume larger up trend from 1.6039 for 1.2555 cluster resistance next. On the downside, however, break of 1.2160 support will delay the bullish case. Intraday bias will be turned back to the downside to extend the consolidation pattern from 1.2348 with another falling leg. 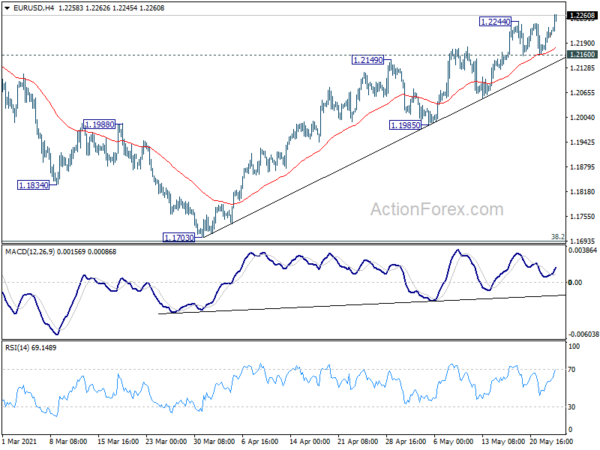