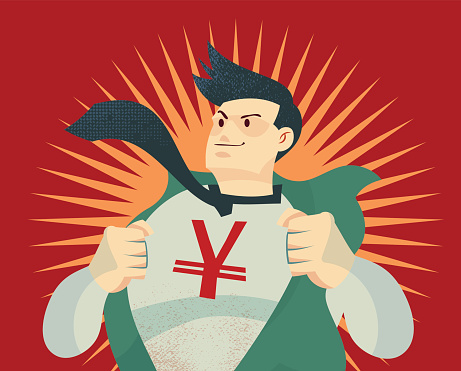 Markets start the first day of the second half dumping risk assets, from stocks to oil to gold and copper. Safe haven flow into treasury has indeed started overnight, pushing US 10-year yield back below 3% handle. In the currency markets, Yen rides on the negative sentiment and rises broadly. Aussie leads other commodity currencies and Sterling lower. Dollar and Euro are relatively resilient, together with Swiss Franc. 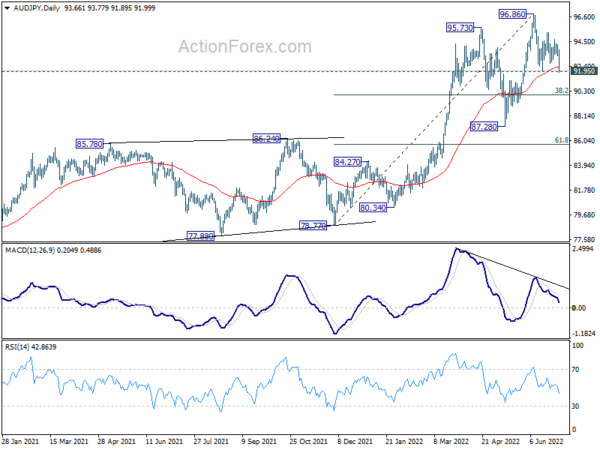 Japan Tankan survey showed that large manufacturer sentiment dropped to lowest in more than a year. But note improvement was seen in the non-manufacturing sector. Also, the strong capital expenditure plan was a big surprise, showing that corporate spending was still robust despite increasing uncertainty.

Consumer inflation expectations rose from 1.8% to 2.4%. Three years ahead, consumer prices are expected to rise 2%, up from 1.6%.

Usamah Bhatti, Economist at S&P Global Market Intelligence, said: “June PMI data pointed to a softer expansion of the Japanese manufacturing sector… Panel members often commented that rising price and supply pressures amid sustained disruption and delays had held back activity in the sector… That said, the degree of optimism regarding the 12-month outlook for output strengthened to a three-month high in June… This is broadly in line with the estimate for industrial production to grow just 2% in 2022 before an acceleration in 2023.”

Wang Zhe, Senior Economist at Caixin Insight Group said: “Restoration in the post-pandemic era remained the focus of the current economy, yet its base was far from strong. Deteriorating household income and expectations caused by a weak labor market dampened the demand recovery. Correspondingly, supportive policies should target employees, gig workers and low-income groups impacted by the outbreaks.”

Innes Willox, Chief Executive of Ai Group said: “Although input price pressures continued to accumulate, Australia’s manufacturing sector expanded again in June with solid increases in production and new orders and a slight lift in employment. While export sales were up, domestic sales fell reflecting the decline in consumer and business confidence in the face of concerns about inflation, interest rates and asset values. Selling prices were higher in June but by a smaller amount than input costs as less robust demand inhibited the ability of manufacturers to fully recover their higher costs in the market.”

Intraday bias in in EUR/JPY is back on the downside with break of 141.39 minor support. Deeper fall would be seen back to 137.83 support next. Sustained break there will raise the chance of rejection by 144.06 long term projection level and target 132.63 support. On the upside, above 142.42 minor resistance will bring retest of 144.26 high instead. 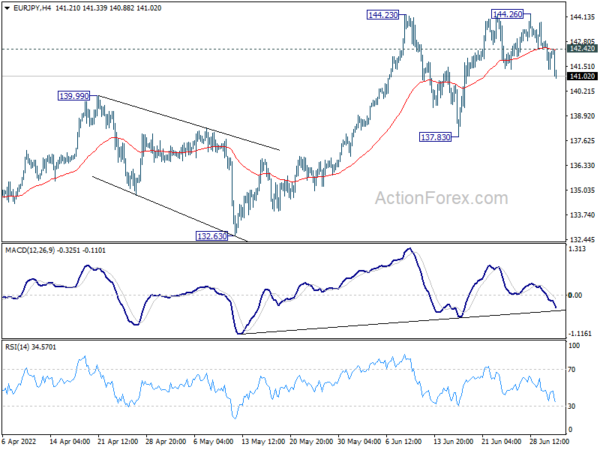 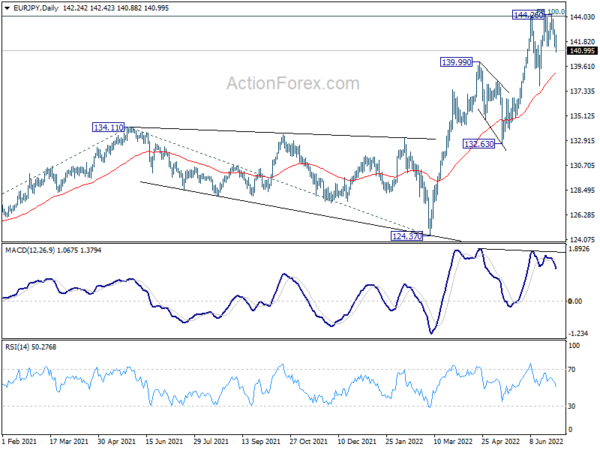