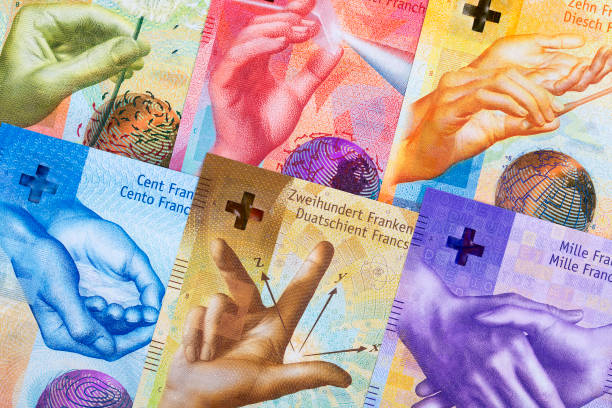 Swiss Franc continues to rise broadly today, with additional help from selloff in Euro. The common currency is weighed down by Germany CPI, which unexpectedly slowed in June. But for now, Aussie, Sterling and Yen are even weaker than Euro. On the other hand, Canadian Dollar is second strongest as supported by rebound in oil prices, while Dollar is third. 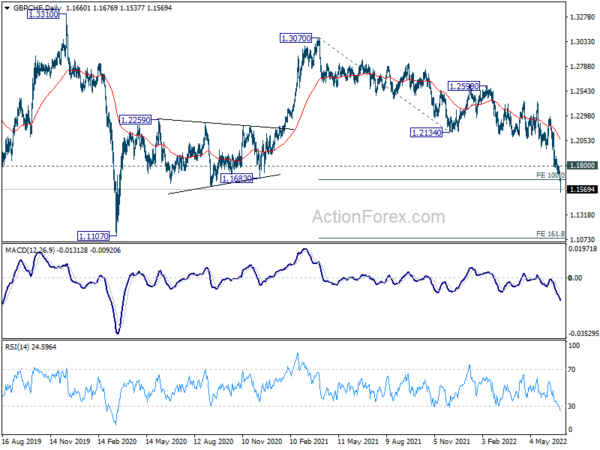 Fed Mester: Getting interest rates up to 3-3.5% expeditiously is really important

Cleveland Fed President Loretta Mester told CNBC today, “if conditions were exactly the way they were today going into that meeting (in July) — if the meeting were today — I would be advocating for 75 because I haven’t seen the kind of numbers on the inflation side that I need to see in order to think that we can go back to a 50 increase.”

“I think getting interest rates up to that 3-3.5%, it’s really important that we do that, and do it expeditiously and do it consistently as we go forward, so it’s after that point where I think there is more uncertainty about how far we’ll need to go in order to rein in inflation,” she said.

“At the Fed, we’re on a path now to bring our interest rates up to a more normal level and then probably a little bit higher into restrictive territory, so that we can get those inflation rates down so that we can sustain a good economy going forward,” she said. “Job one for us now is to get inflation rates under control, and I think right now that’s coloring how consumers are feeling about the economy and where it’s going.”

Released from the US, Q1 GDP contraction was finalized at -1.6%.

ECB Simkus: We should move decisively toward monetary-policy normalization

ECB Governing Council member Gediminas Simkus said that by July meeting, “should see some change in the data, some change in relation to what we have seen at the beginning of June”. He added, “if we see this change in data that points to the persistence of inflation, to its acceleration, 50 basis points should be a policy option for July.”

“With these levels of inflation and inflation being more and more broad-based, with wages growing in the euro area, we should move decisively toward monetary-policy normalization,” said Simkus,

ECB has pre-committed to a 25bps rate hike in July. Another hike is also pre-committed for September, but the size would be dependent on incoming data.

Eurozone economic sentiment dropped to 104 in Jun, EU down to 102.5

BoJ Kuroda: Japan not much affected by global inflationary trend

BoJ Governor Haruhiko Kuroda said, “Unlike other economies, the Japanese economy has not been much affected by the global inflationary trend, so monetary policy will continue to be accommodative,” according to the recording released by the Bank for International Settlements (BIS).

After 15 years of deflation that lasted through 2013, businesses have be “very cautious” in raising prices and wages. “The economy recovered and companies recorded high profits. The labour market became quite tight. But wages didn’t increase much and prices didn’t increase much,” he added.

Ben Dorber, Director of Quarterly Economy Wide Statistics said, “There was growth across five of the six retail industries in May as spending remained resilient. Higher prices added to the growth in retail turnover in May. This was most evident in cafes, restaurants and takeaway food services and food retailing.”

EUR/CHF’s fall continues today and breaches parity to as low as 0.9990 so far. Intraday bias stays on the downside for retesting 0.9970 low. Decisive break there will resume larger down trend. Next target is 0.9650 long term projection level. On the upside, however, above 1.0214 minor resistance will delay the bearish case, and turn bias back to the upside for stronger rebound. 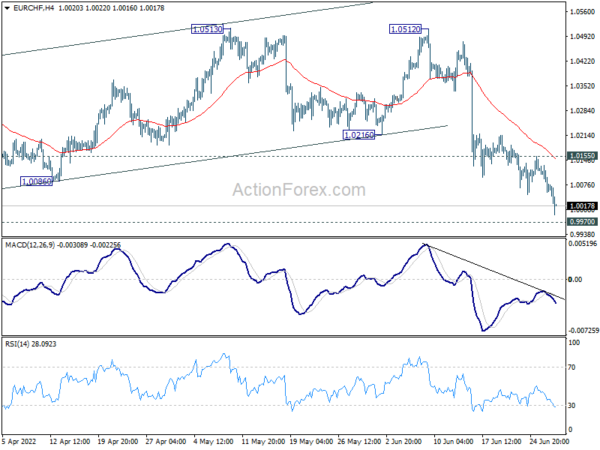 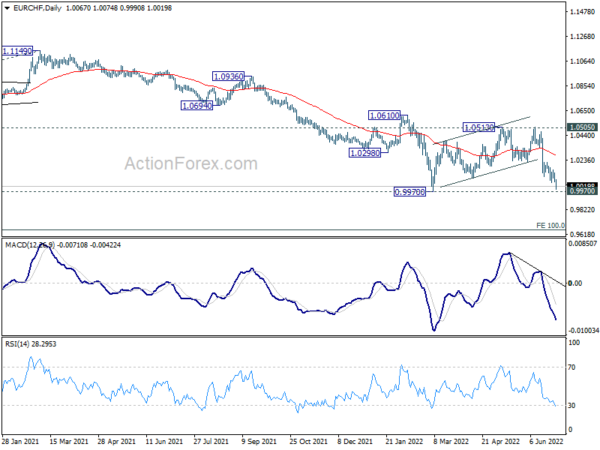 Rivian posts second-quarter revenue above estimates, but expects a wider loss for the year
Here’s where the jobs are for July 2022 — in one chart
EURUSD leak to the downside continues as stocks trade to new lows/yields higher
Dollar Hammered after CPI Miss, Yen Strongest But Others May Catch Up
BREAKING: Curve Finance team warns users to avoid using site until further notice