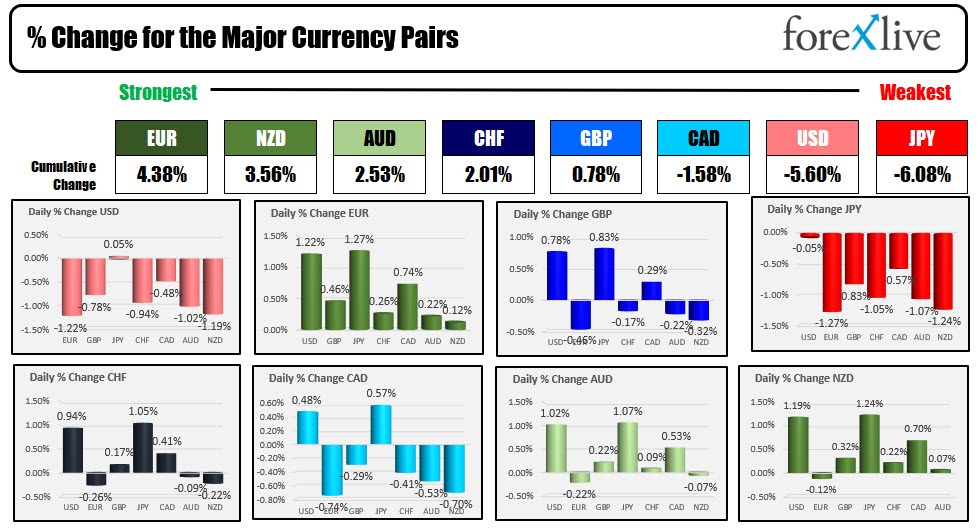 A look at the major indices shows the Dow industrial average leading the way with a near 2% gain. The NASDAQ index was the worst performer of the major indices but still rose by near 1.6%. The S&P index gained 1.86%.

Investors were encouraged by comments from J.P. Morgan at their investor conference. The bank lifted its guidance on annual performance and forecasted that net interest income would increase to $56 billion in 2022, above their January forecasts of $50 billion. They also downplayed the risk of recession saying that the US economy remains fundamentally strong.

Recall from Friday, Fed’s Bullard – although stressing that he prefers to see rates rise to 3.5% by the end of the year – also said he still expects above trend growth and does not see a recession in 2022 or 2023.

Also helping the stock tone was hopes that China would start to reopen and Biden was considering removing Trump tariffs.

The stronger stocks helped to lower the value of safe haven currencies like the USD and JPY. Both those currencies were the weakest of the majors. The strongest today was the EUR.

The EURUSD moved higher helped by comments from ECBs Lagarde that she sees rates out of negative territory by the end of September and could lift it further if they see inflation stabilizing at 2%. The current rate is -0.50%. That would imply 2×25 basis point hikes once QE is stopped. The concession by Lagarde is a more hawkish stance for the ECB President. Later there were reports from ECB sources, that there are others who would who would prefer an even faster pace including a liftoff of 50 basis points. That increased the tone in the EURUSD and it is closing near session highs (and at the highest level since April 26th).

BOEs Bailey said ready for more rate hikes if needed. The GBPUSD spent the US session trading more sideways after rising in the Asian and early European session, but is trading at the highest level since early May.

The USDCAD is closing near its 50% move up from the April 21 low at 1.27668. A move below in the new day would increase the bearish bias.

Eurozone flash June consumer confidence -23.6 vs -20.5 expected
How to Make Money Copytrading – Forex Tutorial for Beginners!
NZD/USD rises above 0.6300 on an upbeat market mood and a soft US dollar
Oil rebounds to settle at $107.62 but still finishes lower for the second consecutive week
AUD/USD settles around 0.6940s on a weak US dollar