The markets are set to end the week with a pessimistic tone. Major European index are trading in deep red while US futures point to a weak open. In the currency markets, Swiss Franc is the strongest one for today, followed by Euro and then Yen. Aussie and Kiwi are the worst ones, but Sterling is not too far away after poor retail sales. Loonie is mixed after retail sales missed, still supported by resilient oil prices.

Technically, Euro appears to be recovering except versus Swiss Franc. A focus will be on 0.8377 resistance in EUR/GBP. Break there will indicate short term bottoming ahead of 0.8276 long term support. If that happens, the subsequent rebound could be strong and quick. That might help EUR/USD defend 1.1284 near term support too. 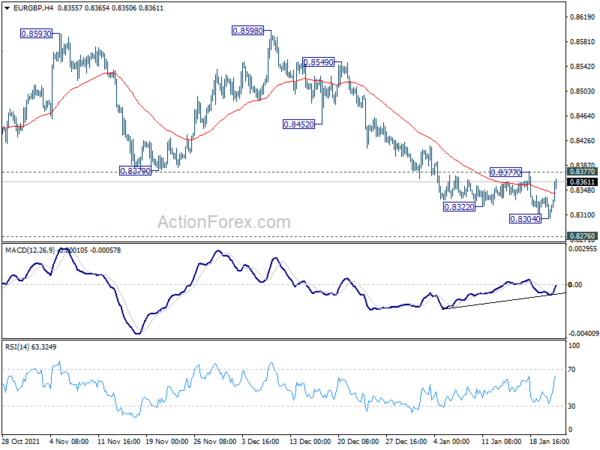 Canada retail sales rose 0.7% mom to CAD 58.1B in November, below expectation of 1.0% mom. The increase was led by higher sales at gasoline stations (+4.9%), building material and garden equipment and supplies dealers (+3.0%) and food and beverage stores (+1.0%). Sales increased in 6 of 11 subsectors, representing 63.8% of retail trade. Core retail sales—which exclude gasoline stations and motor vehicle and parts dealers—increased 0.5%. According to advance estimate, sales decreased -2.1% mom in December.

In the minutes of December BoJ meeting, a board member said, “we’re seeing signs of change in the price-setting behavior of Japanese firms, which had been said to be cautious about raising prices for fear of seeing sales volume fall,.”

Another member noted, “it’s unlikely Japan will see wages rise as sharply as in the United States. But there’s a significant chance both economic growth and inflation could overshoot expectations,”

Earlier this week, BoJ raised 2022 and 2023 core CPI projection. But it also indicated there is no rush to change the ultra-loose monetary policy.

BNZ Senior Economist, Doug Steel stated that “in the final quarter of 2021 the PMI averaged 53.2, indicating a return to positive manufacturing GDP growth after a sharp negative in the prior quarter.”

USD/CHF drops notably today but stays above 0.9090 support. Intraday bias remains neutral first. On the downside, firm break of 0.9084 support will argue that choppy rise from 0.8925 has completed. Fall from 0.9471 might be ready to resuming. Further decline would be seen back to 0.8925 support first. On the upside, above 0.9276 will target 0.9372 resistance instead. 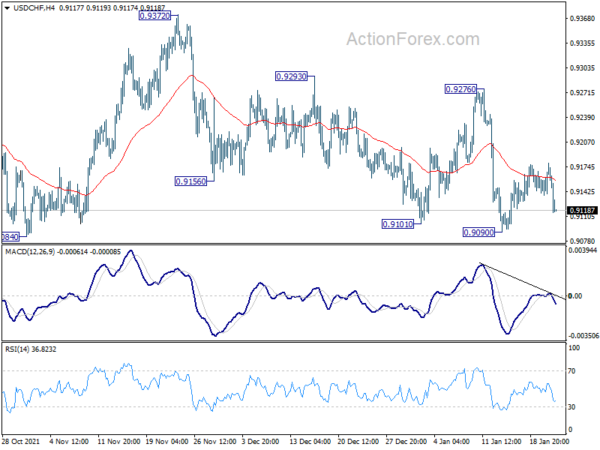 In the bigger picture, the corrective structure of the rebound from 0.8925 argues that fall from 0.9471 is not complete yet. It could either be the second leg of pattern from 0.8756 (2021 low), or resuming larger down trend from 1.0237 (2018 high). We’d pay attention to the downside momentum and assess the odds later. But for now, medium term outlook will be neutral at best as long as 0.9471 resistance holds. 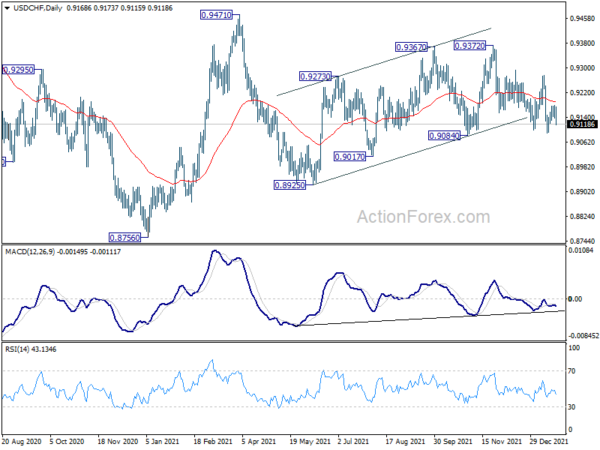 Swiss Franc Staying as Winner, Yen Catching Up
I TESTED A Forex Hedging Strategy From a SCAMMER 🏴‍☠️ | The Results MIGHT SURPRISE YOU! 😱
THE BEST Trading Strategy – FOREX CRYPTO & STOCKS | Day Trader Profitable – My Favourite
Forex Trading | How To Entry Market Like A Pro!!? Newbie Must Wacth!!
Households are now spending an estimated $5,000 a year on gasoline