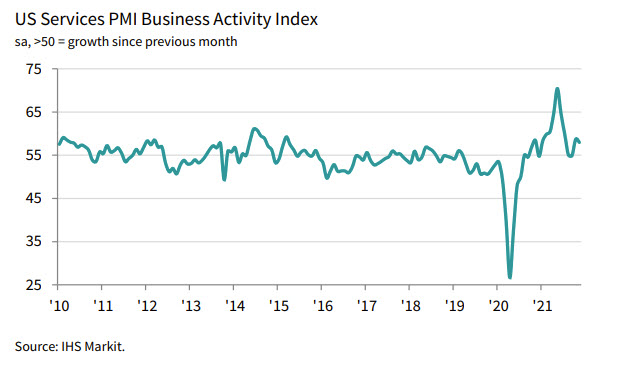 Preliminary estimate came in at 56.5. Services index comes in at 58.0 up from 57.0 in the flash estimate

“US business activity continued to grow at a solid rate in
November, adding to signs that the pace of economic growth
is accelerating in the fourth quarter after the Delta-wave
induced slowdown of the third quarter. While growth is not
matching the surge seen earlier in the year when the economy
reopened, the fourth quarter expansion should be well above
the economy’s long-run trend to mark a solid end to the year.
“Growth is lopsided, however, being led by the service
sector as manufacturing remains heavily constricted by
supply shortages and, in some cases, labor supply issues.
These constraints are also increasingly affecting service
providers, as evidenced by the service sector reporting a near
record build-up of uncompleted orders during November as
companies often lacked the capacity to meet demand. Cost
pressures in the service sector also spiked higher in November,
generally linked to higher prices paid for inputs and staff due
to shortages, the rate of inflation running just shy of May’s
all-time peak.
“While business expectations for the year ahead rose in
November, the vast majority of the survey data were collected
prior to the news of the Omicron variant, which casts a
renewed shadow of uncertainty over the outlook for business
and poses a downside risk to near-term growth prospects.”

GBPUSD corrects up to old ceiling area. Will the sellers lean against the ceiling (again).
This Trading Strategy Is So Good I Might Delete This Video
The rally just won’t stop: WTI crude hits $87
Gold rallies Rs 415 on global cues; silver zooms Rs 858
Structure to Develop Mobile App to Drive DeFi Adoption